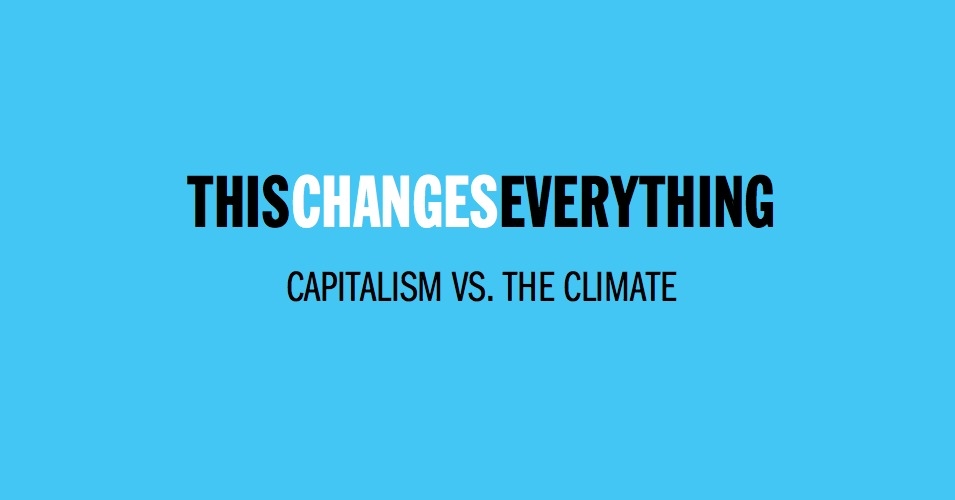 It is 19:00 pm and an ongoing stream of people is finding its way to the Kolencentrale in Amsterdam. People settle down on chairs, facing the massive wall of the working power plant, on which the film will be projected. The crowd is full of excitement and expectations.

For the hungry there is a bunch of veggie foods and tea, on a donation basis. Around 20:00, when the film is supposed to start, so many people have gathered that they have to sit on the floor, for all the chairs are taken.
It is time to start a two hour journey through the documentary by Avi Lewis, based on Naomi Klein’s famous book. It is a story aimed to make people aware of the threats of climate change and how this is related to human behaviour and the capitalist system.

Two hours later, when the documentary is over, it is time for a live Q&A session with Naomi Klein and Avi Lewis, who are speaking to the audience from Paris. Some people are still focusing on what is happening on screen, others are getting together to discuss the documentary. Opinions are mixed. Some people are disappointed. They feel that whereas the documentary serves a very important goal – putting climate change higher on the agenda – it fails to come up with new information. “It’s just more of the same…” Others are more positive and are happy to see so many interested people together. They argue that the aim of the documentary is not to convince the already convinced, but rather to reach out to a wider audience, who might not yet be familiar with the topic.

I myself feel that the documentary does indeed not really add a lot to the discussion on climate change. It shows many rather sentimental images of the victims of climate change, usually the poor and marginalized. The point made is clear: we have to cooperate with the environment and not exploit it for our own short-term benefits. The capitalist system is blamed for the environmental crisis and Klein argues that the way to reverse the current issues is by engaging in collective action. Whereas the documentary does show some examples of successful citizen initiatives, it does not really hand tools or incentives to the audience that is not (yet) directly affected by climate change to take active steps themselves. Klein also refers to the importance of a transition to renewable energy, but she fails to be critical about for instance the negative side effects of the production of solar panels…

Altogether, whereas the documentary has made an attempt to confront more people with their personal responsibility in the struggle to fight climate change, it could have been less sentimental and more concrete about possible solutions. It is nevertheless hopeful to see the number of people who gathered to watch the premiere on a cold Saturday night, showing that a movement is arising. Let’s hope that the documentary will reach out to a broad audience and put climate change higher on the agenda!