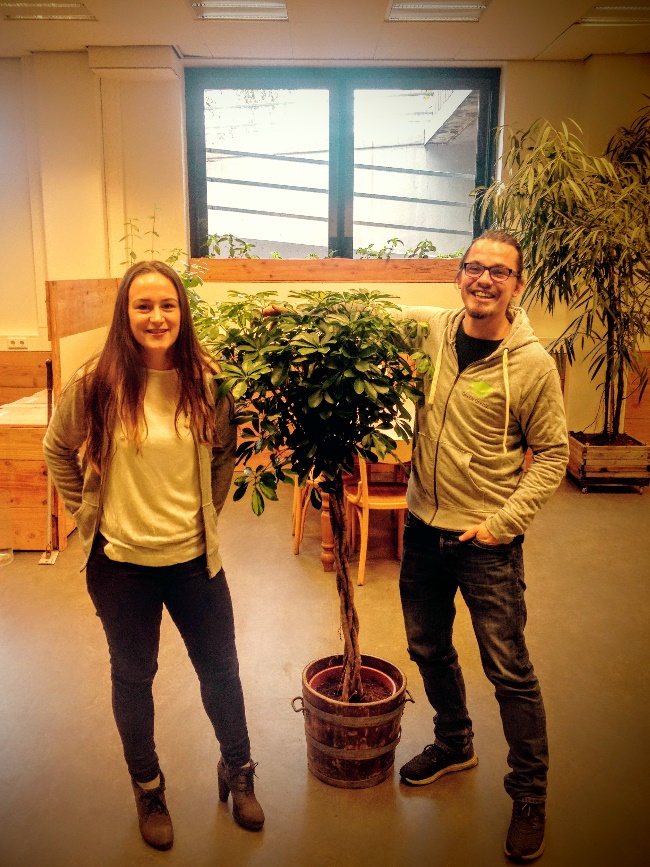 On Friday October 23rd I embarked on a journey to the freshly opened Green Office VU, along with my Studenten voor Morgen co-worker and comrade Floor van den Elzen. Once we arrived at the university we were guided to the Green Office by happy yellow signs; it was simple to find as it is situated in a main corridor on rout to the cafeteria. When we walked through the green archway that marks the entrance to the office we were warmly greeted by Marthe van Rijn, the External Campus Coordinator, and Adriaan van der Tang, the Research Coordinator. After the initial excitement of seeing the inside of a companion Green Office, we sat down to chat.

The first question I inquired after was how Marthe and Adriaan first got involved with the Green Office VU. Both Marthe and Adriaan started working at the GO during July of this year. Marthe told me that she is currently studying her Master’s in Environmental Resource Management, and she first heard about this job when she noticed a posting on a political science Facebook group that she is involved in. Adriaan has recently completed his Master’s, also in Environmental Resource Management. He was previously very involved with the Fossil Free moment, which is where he met Tabitha, the manager of Green Office VU. A few months after meeting her he observed a few posters hanging on the GO windows, displaying an opening for a research coordinator. Marthe and Adriaan felt welcomed from the first day they stepped into the GO; they knew that their opinions were valued and that their co-workers wanted to hear what they had to say. They both praise their manager Tabitha, for incorporating them into the GO life from the get-go. The feeling I had at the office was one of stress-free professionalism. There are cozy couches in one corner, but they are supplemented with a poster for “Green Ideas”. This combination of casual and productive seems rampant in the office. There is always something happening at the office Marthe explained, sometimes it can almost be a bit too gezellig, but it’s always great. Adriaan feels similarly, that there is a balance at the office between being informal and having fun together; they know that when time is scarce they will step up their game and get the work done.

The GO VU had their official opening on October 9th, 2015, a few months after Adriaan and Marthe started, and I was curious as to how the first few weeks as a recognized GO went. Adriaan informed me that the Green Office VU was actually already running a year before this grand opening, but nevertheless they’ve found that people are taking the office more seriously. They explained to me that it helps that the office is visible and people can find them, however they do get the occasional question of “This used to be the copy centre.. who are you?”.. or “Can we use your microwave?”.  As far as any up and coming projects at the GO VU, Marthe told me that in the next few weeks the team will be gathering to write the GO VU policy together. For Adriaan the next big project will be the Living Lab, which will be completed very soon. With this addition students can interact with different companies and we can see what their questions are related to sustainability.

The next question I asked was a little more personal, I wanted to know if working at the GU VU has changed their idea of sustainability, or made them more aware of sustainable issues. Marthe described to me that sustainability is now a central part of her life, as it consumes her work and school. Already she has begun to bring some of the sustainable ideas and practices home, and although she was already involved in sustainability, her work at the GO VU has helped accelerate these changes in her life. As for Adriaan, the GO VU has shown him the practical side of sustainability, as opposed to the theory that he learned in class. It has helped him to see what you can do on a smaller scale, and the big ideas and theories that he learned during his masters can be applied and implemented. Both Marthe and Adriaan are more aware of their food choices now and are becoming vegetarians, a change that Floor and I are noticing in our own lives as well.

“What is life after Green Office?” A question I don’t have an answer to myself.  This was a tough answer for both Adriaan and Marthe as well; a year away is a lengthy time. Adriaan is already in the process of applying for another job outside of the GO. He has known for a long time that he enjoys the working environment of the university, so he is also contemplating applying for a PhD next year. As for Marthe she still has one year left of her masters, and the future holds many possibilities. Nevertheless she would like to work with a like-minded organization in the sustainability field. Both of them agree that once you enter the ‘sustaina-bubble’ it is hard to get out.

And the toughest question of all… outside of the Green Office, what do you do in your spare time? The GO VU has taken over the lives of both Marthe and Adriaan, as many of us who work in sustainability recognize it can do. Adriaan tells us that besides some regular socialization with friends he is busy working at a bar during the week and meeting with his supervisor. For Marthe her life seems to be composed of the three S’s “Salsa dance, Social time, and Sustainability”.

Both Adriaan and Marthe agree that one of the best parts of working at the GO VU is that everyone is open minded and fun, while still making a difference in the world.  “We are really trying to make green more approachable”