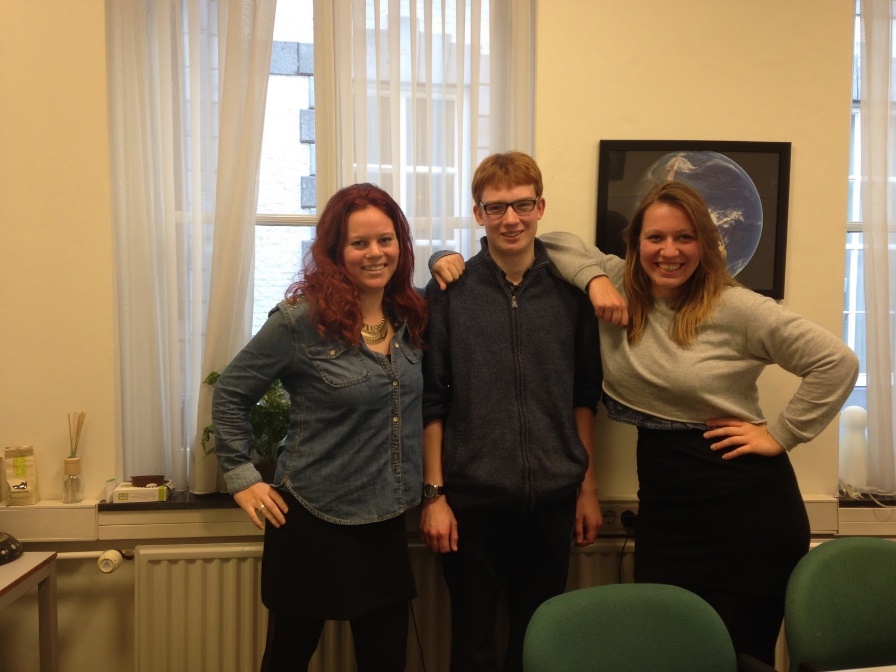 The interview at Green Office Maastricht began with a small surprise. Once we, Floor van den Elzen and myself, arrived at the Green Office we were confronted by three doors to choose from, each room being a part of the Maastricht GO. The first room we entered did not provide us with success, but upon peeking into the window of the second room we saw our target, Anslem Grahl waiting at his computer. Our first sign should have been seeing him at his computer, waiting on Skype, but we entered the room anyways. Much to Anselm’s surprise we were there in person! As he had expected us to meet over Skype.

Once we had gotten over the miscommunication, and realised we were skyping in real life, we moved into the largest of the three rooms for further questions. Anselm is one of the longest employed Green Officers and first joined the GO in September of 2012. He encountered the office at an info market during the first year of his bachelors, in European Law at Maastricht University. He didn’t have much knowledge of sustainability, but was aware of climate change, and cared about making an impact, therefore the Green Office seemed like a great match.

Anselm tells me that he began as a volunteer for the GO, having his first day at one of the recruiting events. His starting weeks at the GO were a bit confusing, but one of the senior members at the GO helped to mentor him and teach him the ropes, and approximately a year later he was hired on in a permanent position.

The general atmosphere of the Green Office is one of professionalism and efficiency, but also a friendly one. All of the employees try to keep meetings a little more serious, to make things more efficient. Every half year there is a retreat for the employees in Belgium, where they work and have fun. Some of the biggest changes in Green Office Maastricht are in the communication. Everything used to be communicated among everyone and all decisions were made as a team, however this led to a very slow work process. When Anselm started this changed to a more individual structure, the project coordinators have more autonomy, and usually only ask for feedback when it’s needed. However he has found that this strategy is almost too effective, and is trying to get the team to concentrate more on general strategy. In addition governance is becoming a larger portfolio at the Green Office. Originally the university facility services did not communicate well with the GO; when asked what their expectations of the GO were they answered “we don’t have any expectations of the GO, because students just drink and have fun”. Now sustainability is one of the core pillars of facility services, and this has changed the GO’s role.

[pullquote]They told us.. “we don’t have any expectations of the GO, because students just drink and have fun”…now sustainability is one of the core pillars of facility services.[/pullquote] Life after the Green Office? Anselm assured me that life at the Green Office, unlike a university degree, did not have to end. He plans to continue his involvement with the Green Office, and is hopeful the movement will continue to grow in the coming years. Outside the Green Office his interest lies in politics, and he would be interested in working for a political organization or in journalism.

I saved the hardest question for last, what does Anselm do in his spare time? Besides saving the world, he enjoys architecture, economics and politics.. and when he’s really going wild –  salsa dance.