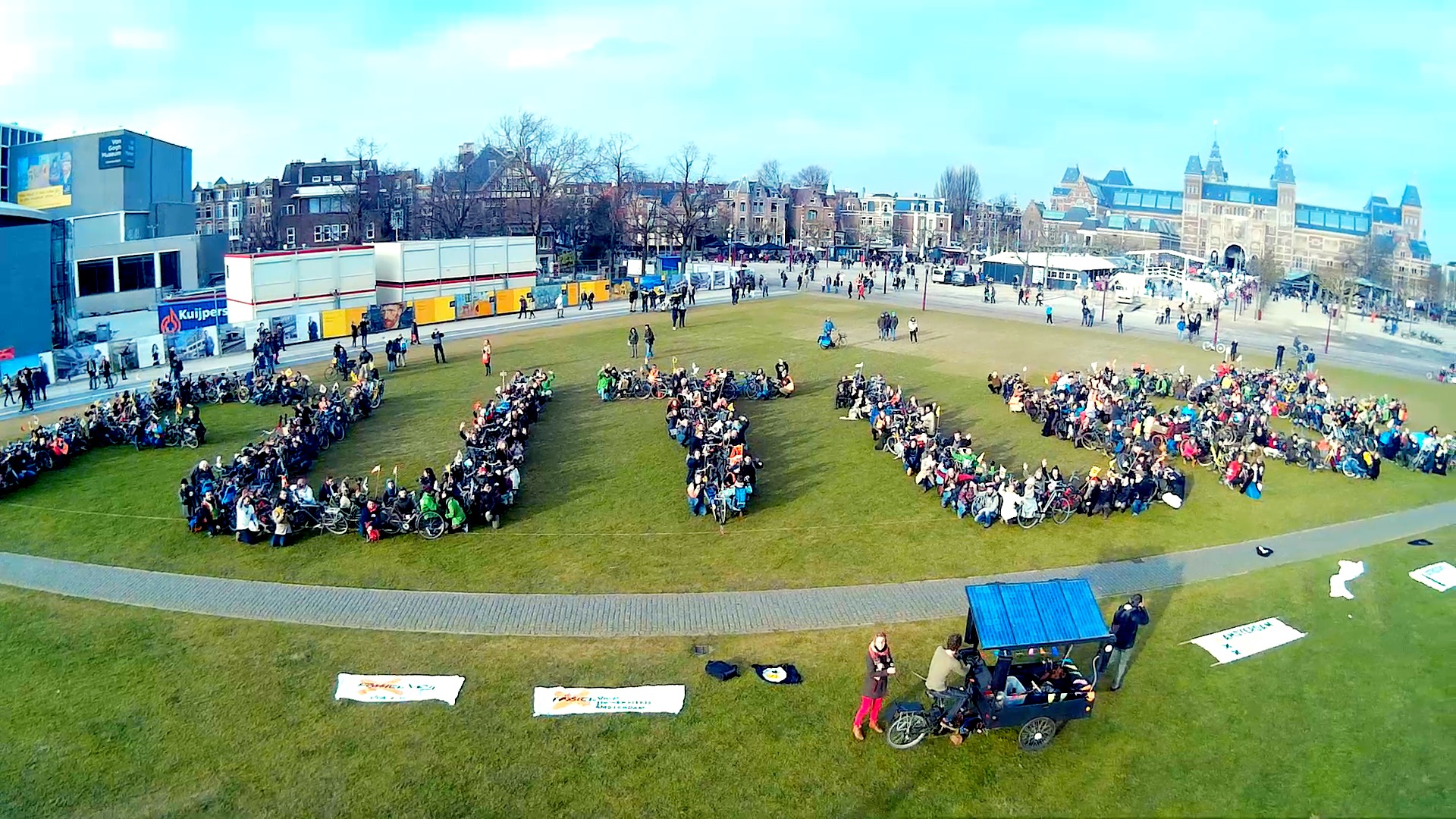 For those who may have seen it briefly in the news, the ‘COP21’ Paris Climate Conference last December is for many only a faint memory. But for others its relevance has been much longer lasting. While some are optimistic – the agreement was indeed the first after an embarrassing history of repeated failures – others are more critical, pointing out the lack of legal obligations behind the pledges, as well as the implicit concessions given to the fossil fuel industry. To find out more, I phoned Liset Meddens, Coordinator for the Fossil Free movement of The Netherlands, who explained why her response to the COP21 was even more radical.

You’re the National Coordinator of Fossiel Vrij Nederland. What do you do and what is your aim?
“Fossielvrij NL is part of a global movement lead by 350.org in the USA, aiming for a bottom-up climate movement to remove the social licence of the fossil fuel industry. We organise and support divestment campaigns for universities and institutions to encourage them to pull their money out of fossil fuel investments. This powerful industry is keeping us from the fast transition to renewable energy that we need. If we break through the power of the industry, we can enable a faster transition.”

So this definitely places responsibility on those in power at the top of the ‘system’?
“Yes, exactly. But we take the lead. Those in power now have too little interest to change quickly. But we as the public do! We have to increase the pressure on them to break from their associations with fossil fuels. Politics needs to serve the needs of the people and not those of harmful industry.”

So tell me about your hunger strike. Was it an initiative particularly in response to the decision of the Paris Climate Conference (COP21)?
“We had actually already thought about it before, because we knew the COP21 would never be enough. We wanted to do something which represented the scale of the problem. Sometimes its difficult to express how worried you are , to express just how big this problem is! This was a personal initiative between some friends, colleagues and I. Vatan Hüzeir’s [a colleague] brother is a practicing Muslim and is used to fasting during the Ramadan holy month. He was inspired to turn this act into a political statement, and use it to show solidarity with climate change victims. I supported this idea – it resonated with me because this is something that can show your concerns and commitments through something that you do. People are really getting hungry from political inaction on climate change, and its ridiculous that we’re keeping the system as it is while people are dying today from hunger often caused ultimately by climate change. And its only because a few in power are delaying the change that we need.”

So – this was a show of empathy for those who would be getting the worst end of this COP21 deal.
“Yeah! But also the people who are already impacted right now. Actions speak louder than words – this hunger strike is about acting – showing your expressions of urgency for the situation, rather than just talking about it in meetings and conversations.”

So how many people did the hunger strike, and for how many days?
“Vatan started by himself on the last day of the COP (Saturday), and then I joined him on the Monday. Then from that week, several other people joined us. On the 11th January we had twenty-one people from five countries hunger striking for forty-five days together. And around twenty-six more had committed to join later in the year.”

I imagine you got lots of support for this, but did you also receive some criticism?
“Yeah, we did. People were worried about us; even the head of Urgenda (the Dutch legal team attempting to sue the government for failure to act on climate change) phoned me to ask if I was all right and if I needed any help. Also, there were quite a lot of people who said they would rather see me healthy and campaigning than doing harm to my body.” Did you get any publicity from any press or media outlets?
“Yeah, on my first day I was on the radio on Amsterdam FM. And the AT5 (Amsterdam-based news and media television station) film crew came to film me at my house. Obviously that was part of the aim of it – to get the news out about the poor decision of the COP. I found that the Netherlands was dealing with other issues – I think the COP21 was in the news for maybe one or two days, and after that there was absolutely nothing. It worries me because this is going to dominate our whole economy over the coming ten years, so we really have to get conscious about the consequences of this issue. In the end they (AT5) didn’t even broadcast the issue! I never found it online and then they never replied to my emails.”

Can you give any final words of advice for what we as young people can realistically do to help support the climate movement?
“First and foremost, you have a lot more influence than you think. If ten of you send a letter to a company, you are right there, in their headquarters, on the agenda of their meeting, and they will discuss your topic. You can actually have a big impact! Your actions really make a change! Even more so if you organise together. Also, try not to feel so guilty. We feel guilty about everything we do – whether we take a car, or use one plastic cup, or don’t take short showers – but its not so much about showering less. A much bigger change needs to happen. We have to look beyond ourselves and look at politics and the powerful players at the top of our society.”

We shuffle uncomfortably in out seats when we learn that even the Dutch National Director of one of the world’s most recognizable environmental NGOs is overwhelmed with climate concern; worried to the extent that her and her colleagues refuse to eat. The struggles of Liset and her team at Fossil Free NL are one of thousands across the world, each one a testament to the awareness still yet to be grabbed, and the work yet to be done.