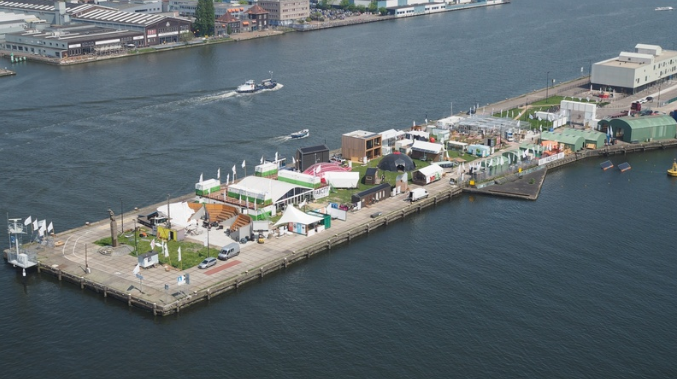 Urban areas pose one of the largest challenges to sustainable development due to their growing resource demand. Under the current linear take-make-use-dispose model, cities require an infinite supply of resource inflows and an unlimited environmental capacity. A transition away from linear to circular cities is therefore needed. A circular city is an urban area that has a near-to-zero waste metabolism, by functioning in concert with its hinterlands and applying renewable energy sources, without compromising the city’s livability.

Last semester the LDE Centre for Sustainability and an interdisciplinary research group of the TU Delft explored the possibilities of the implementation of such a city in FabCity, Amsterdam. A temporary experimental area for future green and selfsustaining cities that opened between April and June 2016. FabCity Amsterdam is inspired by ‘Fab Labs’: a global network of independent initiatives that desire to drive sociotechnical transitions by facilitating open source, peer-to-peer and co-creative solutions. Knowledge platforms can facilitate the transition to circular cities in two ways. They help actors build a shared understanding of the transition and increase the capacity to convert vision into action. Although FabCity was a succes and seemed to check all the boxes on paper, it could have had a bigger contribution than it eventually had. The biggest reason is that there was a shift of goals during the project. The initial goal was ‘finding solutions for urban problems’ but along the way this shifted to the more realistic goal of ‘showcasing already existing solutions’. Showcasing of individual solutions forms a barrier to the co-creation process which is needed to establish a shared understanding. During the project participants were mainly pre-occupied with showcasing their own pavilions and solutions.  The majority of the participants do not have an established position in the market yet which results in an uncertain revenue stream. Most participants did not have the time nor resources to explore new partnerships, sharing of knowledge therefore became a lower priority. Besides this there was a lack of a collective goal. Therefore, a shared responsibility to achieve “the goal” was not possible.

Sharing knowledge and experiences is necessary for the future of our cities. A knowledge platform will not arise on its own and needs some kind of control in its establishment and monitoring during the project. Barriers of time and resources could possibly be overcome by making the platform digital. The initial Fab Labs are digital platforms and somehow this aspect got lost during the up scaling to FabCity initiatives. Nevertheless failing is learning and only by not being afraid to fail innovation can transform our cities.