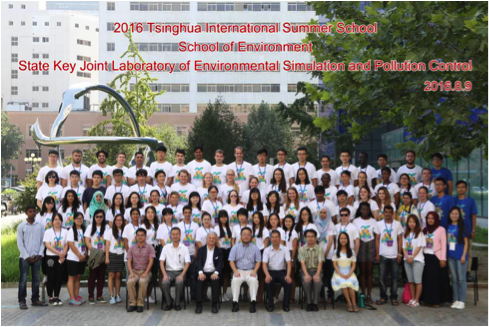 End of August, Rianne – former treasurer of Studenten voor Morgen – and myself, returned from China, where we spend a little over a month travelling and, for the most part, participating in a summer school on Chinese sustainability issues at Tsinghua University in Beijing.

Tsinghua is seen as the best university of China by the people who go there and as one of the best two, together with the nearby Beijing University, by other people. We followed the programme with a group of around 25 international students and 25 native Chinese students, which resulted in an interesting mix of perspectives, lots of new knowledge on Chinese environmental issues, and tons of fun nights of karaoke, Tsingtao and delicious Chinese delicacies (chicken feet come highly recommended). The programme started off with a welcome party: the first every party I attended that was set around a PowerPoint presentation. While some of us, including myself, had answered the question about dietary preferences earlier in the day by stating we would prefer vegetarian food, literally everything in the buffet except the fruit contained meat. Eating around the salami and ham, the party started and quite a party it was. We witnessed our presenter of the night breaking out into a paint brush (not a typo) dance all around us, while we were still sitting at our dinner tables drinking tea, saw some great Pakistani-Indian dancing and an awesome combo of Ghanaian-Nigerian heritage. Rianne and I joined Mayowa, BB and Deborah on the stage for the latter, which caused our presenter to ask us to show some Dutch dance tradition. Rianne was alert enough to run off stage, so this left me to tell the crowd that the Netherlands just was not that traditional and that there was certainly no such a thing as a wooden shoe dance. the best part of the meteorological institute

Our days consisted of two lectures of two hours and a selection of field trips. Most of the lectures were on air and water pollution, but Chinese history and Chinese culture were also covered. Especially the lectures on air pollution were very informative and really went into the Chinese situation. Interesting statements were made (“The number of cars is not a problem, every family should be able to have two cars, we just have to make them cleaner”) and a dichotomy between technological and behavioural change surfaced. For reasons easily guessed, the whole country seems to stay away from stating anything that would go against the growth-paradigm China is now in. However, a lot of initiatives do arise to make this growth (technologically) cleaner, because pollution is happening all around and is experienced by everyone. A couple of PhDs from Germany taking a selfie with wastewater

One of the coolest things we did was the field trip to the Great Wall. Although this was not necessarily related to sustainability, it was great for team building. Among the more sustainability-related field trips were visits to the labs of Tsinghua, the Beijing meteorological institute, an eco-industrial park, and – my personal favourite – a waste water treatment plant. The huge terrain housed different types of filters and treatment facilities and though the odour was not great, it was interesting to learn how much of an issue water scarcity can be, especially coming from a country where the issue has always been having too much water. A particularly inconvenient way of experiencing water and electricity shortages was the hot shower schedule that would allow hot showers in the morning only until nine am – very inconvenient after a night out… Team-building at the Great Wall

Aside from the lectures, we worked on a group project. The groups were created to have a balance between Chinese students and internationals from different countries and universities. My group consisted of a Tanzanian PhD student working in China, a recently graduated Welsh girl from Newcastle University, a girl from the Philippines, who was employed by a government agency, five Chinese Bachelor students and myself. It was really interesting to see how students from different backgrounds approached the problem at hand, we choose indoor air pollution, differently. The Chinese students seemed much more focussed on technological solutions, while the internationals were all thinking about behavioural change. Though this was also coming back throughout the rest of the programme, a part of the difference might also be contributed to the fact that the native students were all environmental sciences majors, while the internationals were three out of four environmental policy students. On the final day of the summer school, eight groups presented their ideas, most of them working on air or water pollution, and two groups on waste management and -separation, another topic closely aligned to behavioural change. These groups raised another recurring issue: information distribution and awareness. As you can see in the picture, the infrastructure to separate waste is there, but nobody knows what belongs in the different categories, which results in very inefficient separation. Our group came up with a road map for minimising indoor air pollution by outlining simple steps to be taken towards cleaner air, changing between behavioural and technological adaptations made on a household level. I have been missing hearing my Chinese name called throughout the room, but luckily there is still WeChat (Chinese WhatsApp) on which the group with all students still flames up from time to time with everyone sending pictures of the places they are at now. In a smaller group with some of the people we hung out with most, I am still being referred to as 花花, Chinese for little flower and pronounced as a sort of double duck sound: ghuaghua. Aside from hello, thank you, toilet and you are welcome, this is about the only Chinese I managed to master, together with one more thing: 室内空气污染, pronounced as ‘shìnèi kōngqì wūrǎn’ which is supposed to sound a little like ‘sjuh nay kong tsie woe jaan’: Chinese for indoor air pollution. Perhaps because of my perfect pronunciation of this issue at our presentation (Not. It was more likely due to the enormous amount of work especially Cherise, one of the Chinese students, put into doing a survey), we even won the first prize for our group work! It was a great couple of weeks and though the level of the classes was not always as challenging as I had hoped, I would advise everyone – and especially students who have not gotten into sustainability that much yet – to apply next year!

Do you want to do this summer school next summer? Keep an eye out on the website of the Tsinghua School of Environment. School costs and housing were covered by the university; travel to and expenses in Beijing are to be paid yourself. Sign-ups will probably start around April.