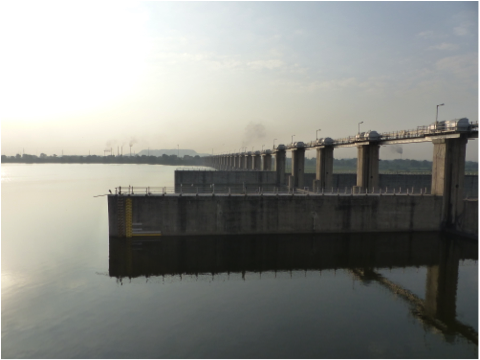 AHMEDABAD, INDIA – Towards the beginning of the 15th century, legend claims, Ahmed Shah was standing on the banks of the Sabarmati river when he saw a small hare chasing a big and strong-looking dog. He asked a spiritual leader to explain this and got the reply that it exemplified the uniqueness of the land and its people. This statement made the Sultan decide to turn this place into the capital of Gujarat. This is the first of two articles on the Sabarmati river and the course it fares after it leaves Ahmed’s city: Ahmedabad.

Though the city and its history are inexplicably bound to the river, this has not kept the Sabarmati from degrading. As a part of a project starting in the early 2000s, a dam has been built to manage the water levels of the part of the river going through the city. This is where exploring the downstream of the Sabarmati starts: at the Vasana Barrage.

Beyond the Vasana Barrage, the river almost falls dry and is limited to about one fifth of the width before. There is a small canal called Fatewadi, that – one of the employees of the barrage explains – supplies water for irrigation to villages inland. Water supply is paramount for the income of farmers around the Sabarmati, but the Fatewadi canal only flows when there is a surplus of water in the Sabarmati river, which never happens when the water is most needed: in dry seasons. Six villages are thus ‘supplied’ by the canal, but for the last village to be reached, water must flow into the canal for around two weeks without disruption. In practice, this only happens during the monsoon season, when the region already has plenty of water. On paper, the places connected to the Fatewadi canal are supplied, but in reality farmlands remain dry. Another type of livelihood dependent on the river is fishery. Just beyond the barrage, fishermen stand waist-deep into the water with their nets. Walking towards them means first passing a stream coming from a pipe, which turns out to be sewage water released into the river without treatment. The fishermen we speak with tell us they have been in the water since five o’clock that morning. They show us their catch: six tiny fishes between four people, that – due to their size – will probably not even be sold. Left: Man fishing near the pumping station and the place where sewage is let into the river. Right: Fishermen showing their catch of the day, after fishing all morning, they have only caught about six of these small fish.

A bit further downstream we come across a pumping station. Every sewage treatment plant (STP) has around six of these, pumping up waste water from the pipes coming from different nearby neighbourhoods. The men working explain that the station is in good shape. It could even handle more waste water than it is pumping up now. That sounds good, but we could clearly see two pipes leading to the station, one of them ending in the creek we passed earlier. So why is this waste not pumped to the STP? The employees were not sure: it should be possible, but they laughed when one of us suggested they should simply try it out. They did not know how to operate the more advanced technology. And even if they would have, why should they start asking question about this? They themselves did not have running water at their workplace, had to ask for drinking water from the employees of the barrage working two buildings away, and did not have any sanitation facilities around the station. Again, on paper this plant is performing well, even with capacity to spare, but in reality sewage is released into the river twenty-four hours per day. Left: Woman walking among solid waste dumped along the river bank. (image: Vishal Mehta) Right: Pumping station. Asking questions about the management of the incoming sewage, the men working here told us they cannot worry about this. They don’t even have toilet facilities, running water and drinking water to get through their work days.

Continuing downstream, we reach an area full of construction rubble and drying cloth. Children and young men are sorting through the rubble to find anything suitable for sale. The fabrics drying on the grass near the riverbank have been coloured using the traditional local stamping technique and are decorated with beautiful patterns. The boys that are spreading them out explain that they wash the cloths after printing them and sell them once they have been dried in the sun. Boys are playing in the water and a little further downstream laundry is done for hostels and even hospitals. Just to clarify, the pipe releasing untreated sewage into the river was only about a hundred meters upstream of this point. In conversation with the employees of the barrage, the fishermen, the men working at the pumping station, and the boys drying the freshly painted fabrics, it becomes increasingly clear that regulation around the river does not fit the daily reality of the people concerned. Dry farmlands that are irrigated on paper, a pumping station with capacity to spare located right next to a sewage pipe releasing untreated sewage into the river and hospital linens being washed just downstream from that spot.

Aside from farmers and workers in fishery and crafts, there is another big employer that is dependent on the river: industry. In the case of Ahmedabad – popularly known as the Manchester of the East – this mainly concernes textile industry. In part two of this article, the opposite bank of the river will be explored, where the sewage treatment plant shows the way household waste water is being treated, and the impact of industry waste water will also become visible.

This article is the first of a two-part series, based on a walk that took place in Ahmedabad, India on October 23rd of 2016. The walk was organised by City Water Walks – Ahmedabad, a group of people who walk up- and downstream the Sabarmati as concerned citizens. City Water Walks take place in different cities in India as a part of Veditum. Veditum is a larger initiative by Siddharth Agarwal, who walked all the way down the Ganges River to – in his own words – “attempt to document the stories of the rivers of India, bringing out a first person narrative of the river’s condition and life of the people of the basin”. The group from Ahmedabad did a walk around water supply to Ahmedabad two weeks prior to the walk this article is written about. They are now assessing whether they can expand the initiative towards taking walks looking at different themes such as the waste disposal system of the city.