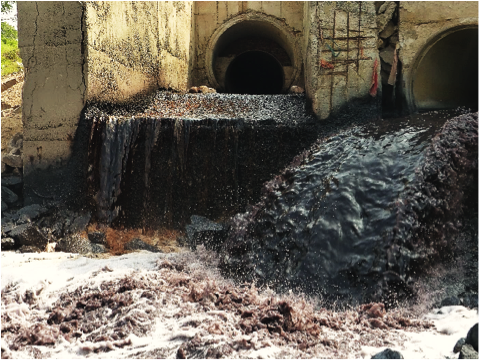 AHMEDABAD, INDIA – In 1915, the Sabarmati Ashram was founded on the riverbanks of the river Sabarmati, about four kilometres upstream of the city centre of Ahmedabad. Between 1917 and 1930, this would be the base of Mahatma Gandhi, his wife Kasturba and several of their followers. Aside from forming a place for schooling in agriculture, manual labour and literacy, the Sabarmati river banks were the place from where he started his famous Salt March, an essential event in the process of India’s independence. This is the second of two articles on the Sabarmati river and the course it fares after it leaves the city Gandhi spent fourteen years of his live: Ahmedabad.

Ahmedabad and the rest of the Gujarat state take great pride in their connection to India’s most famous freedom activist and have turned the Sabarmati Ashram into a museum on Gandhi’s live and works. Though part of the Sabarmati river – as well as many others – plays a vital role in one of the most prominent parts of Ahmedabad’s history, this has not kept the Sabarmati from degrading. In the first article of this series, the part of the river just beyond this dam was explored (find this article here). This article will focus on the other side of the river banks, the industrial area called Pirana, after the Pirana landfill, the hill of solid waste visible in the background of the picture on the right below. Left: Birds in the water with plastic drifting around, just beyond the barrage. Right: Men walking by the Sabarmati downstream of the barrage. In the background the Pirana Landfill, the ‘hill’ that is the destination of most solid waste of Ahmedabad.

On the other side of the river, near to the city’s major landfill, is the biggest Sewage Treatment Plant (STP) of Ahmedabad. Standing around a miniature of the plant, one of the STP’s employees tells us about the management of the site. Every three years a tender is written and the company with the most attractive offer manages the plant for three years. The current company has been there for two years and no one currently working at the STP has worked there before they got the procurement. To the question whether this keeps them from investing in long-term projects and human capital, the man responds with an Indian headshake. That is the case and that is unpractical, but it is the way it is. There have been plans to make the period longer and when new plants are built, the Ahmedabad Municipal Corporation (AMC) works with ten-year contracts, but so far, the contracts after that have not been changed.

The standards are stringent and the employee assures us monitoring by the AMC is definitely happening. At the same time, the company itself never had any penalties nor did they hear of other companies receiving them over the past years. To illustrate, the sewage pipeline we saw ending into the Sabarmati earlier is not a violation and not a new phenomenon. So somewhere, something is going wrong. Left: Sample of water coming into the sewage treatment plant (STP) to the right, sample of treated water on the left. Right: One of the sites in the STP.

The STP is designed to treat sewage: household waste water. However, the industrial waste water of Ahmedabad is another large issue. Historically, Ahmedabad has a large textile industry, which has been initiated under British rule and makes some go as far as to call the city the Manchester of the East. Cotton is sourced from the rest of Gujarat state and one of the main industrial activities is dying fabric. Each factory has an in-house plant for primary treatment, after which the waste water is pumped to a secondary treatment plant to be shared with other industry on the same site. The water coming from these sites is then pumped into what is known as the Mega Pipeline, the end of which can be seen on the photos below. From here, the water is released into the river. The Mega Pipeline runs through the city and is, according to some, illegally attached to private industrial waste water pipes along the way. The water streams out forcefully into the river 24 hours per day. The smell, the colour of the water and the bubbles coming up from the river water clearly show the toxicity of this water, but this is not a formally existing issue. Aside from the illegal pipes, explanations could be improper treatment on sight and/or in the regional plants. Additionally, primary and secondary treatment of waste water still does not deal with possible heavy metals in the effluent. Meanwhile, activists report cases of illness of people and cattle, heavily polluted ground water and crop failure downstream the area. Downstream the Sabarmati reality does not reflect what is happening on paper. Formally, the village Viramgam is being supplied with water, because the Fatewadi irrigation system is in place. Formally, the pumping station is taking in all sewage water supplied to it and could even handle more. Formally, the effluent going into the river from the Mega Pipeline has been treated twice and is safe to be released into the water. On paper, no issues exist and thus no action is taken. In reality however, farmers’ lands remain dry, hospital linens are being washed downstream of a sewage pipe release point and bubbles are rising from a river that is used to irrigate lands growing vegetables only a few hundred meters downstream.

Ahmedabad city is again embracing its river, developing the riverside running through the city and taking steps to improve the water quality in the area. On the other hand, however, just beyond the barrage environmental injustice continues outside of the cities’ sight. And if you do not physically see them, it is hard to acknowledge problems that do not formally exist.

This article is the second of a two-part series, based on a walk that took place in Ahmedabad, India on October 23rd of 2016. The walk was organised by City Water Walks – Ahmedabad, a group of people who walk up- and downstream the Sabarmati as concerned citizens. City Water Walks take place in different cities in India as a part of Veditum. Veditum is a larger initiative by Siddharth Agarwal, who walked all the way down the Ganges River to – in his own words – “attempt to document the stories of the rivers of India, bringing out a first person narrative of the river’s condition and life of the people of the basin”. The group from Ahmedabad did a walk around water supply to Ahmedabad two weeks prior to the walk this article is written about. They are now assessing whether they can expand the initiative towards taking walks looking at different themes such as the waste disposal system of the city.