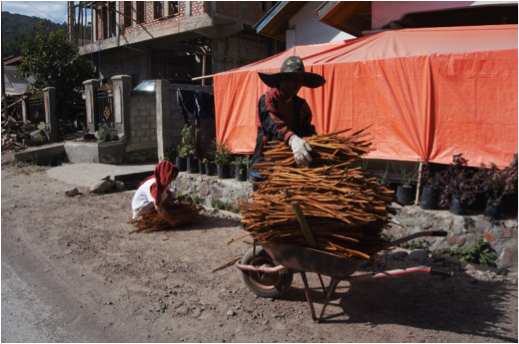 A case study on cinnamon for WWF Indonesia

Almost exactly one year ago, I attended a guest lecture of the CEO of WWF Indonesia at Utrecht University. He spoke about the effects of Western consumption on nature in Indonesia, such as massive forest clearings for the consumption of palm oil. The impact of our consumption was a topic that appealed to me, so I asked about internships. Many emails later, I got what I wanted: last summer I went to Indonesia to do research for the WWF and I also had a thesis topic! In the beginning of June I got on a plane with my backpack full of notebooks, my laptop and a research visa. Fourteen hours and a dinner in Guangzhou, China, later, I arrived in Jakarta, where I took some time to settle. Two weeks later I flew to Sumatra, an island with a major cultural difference compared to the (for me) familiar Java. The project manager of the RIMBA project picked me up and we went to the WWF office in Jambi, a city in the east of Sumatra, where the WWF team working on this project is located. The RIMBA project is named after the local native inhabitants. In this area of Sumatra a large part of the rainforest and natural vegetation has been lost. This leads Indonesia to have one of the world’s highest deforestation rates due to land fragmentation and fires caused by logging, mining, and infrastructure. This again causes a loss of biodiversity and degradation of ecosystem services. Within Indonesia, Sumatra stands out when it comes to the intensive forest clearings, which has resulted in the conversion of 70% of the island’s forested area into agriculture by 2010.

To prevent an increase of further deterioration, project RIMBA plans to develop a green economy in several conservationist areas on Sumatra. Such an economy should strengthen community livelihoods and the conservation of landscape and biodiversity hotspots by collaborating with local stakeholders, such as farmers and local companies. Together they could improve the integrity of the ecosystem and create business opportunities, supporting the growth of eco-tourism and curbing negative trends of land and environmental overexploitation. In the end, this should lead to a sustainable green economy A great way to reach a green economy is with the use of agroforestry. This is a combination of agriculture and tree planting, which prevents overexploitation, erosion, and ensures economic benefits. It helps to develop more sustainable land usage, conserves biodiversity and improves farmers’ livelihoods. An example of a good fit for agroforestry is cinnamon. Cinnamon is made from the bark of trees that grow on slopes; it does not require a lot of labor and can be harvested whenever the farmer needs money. The roots prevent erosion, the tree trunk can be used for wood and it is already often produced organically. In short: a super crop!

I decided that this was going to be the main topic of my research: looking at the potential of agroforestry in the form of cinnamon for farmers and ultimately a green economy. I moved to Kerinci on the other side of Sumatra, where more than 85% of the world’s cinnamon grows. I had to make the scariest ride of my life in an old mini-van on a bumpy road with a crazy driver. Luckily, I survived and once I arrived, Kerinci turned out to be a beautiful area with a volcano, waterfalls, and a national park. During my time here I lived with an Indonesian family who taught me about local activities and helped me finding my key respondents. For my research I talked to farmers, middlemen, government departments, several organizations, and people in the village. I also conducted interviews with cinnamon companies to understand whether a shorter supply chain would develop the livelihoods of cinnamon farmers. After I had stayed in Kerinci for a while, I moved on to the small town of Merangin, and did the same research here for comparison.

I found out that there is one major difference between the areas of Kerinci and Merangin. In Kerinci there is a company, which shortens the supply chain between farmer and consumer, thereby ensuring that the farmer will get a better price for the cinnamon. Not unnecessary in the area because more and more farmers stop cultivating cinnamon and switch to the better priced cultivation of coffee. However, as my research results show, coffee needs pesticides and fertilizers and trees need to be cut down, which does not go for cinnamon. In Merangin I conducted the survey with farmers who work in a longer supply chain and thus are more likely to get less money for their cinnamon. My results show that all farmers who receive a lower price for cinnamon within a regular supply chain, want to switch or are already switching to coffee production. On the other hand, farmers within a shorter supply chain have more variety in crops, have more sustainable livelihoods and often stick with the cinnamon trees.

Doing this research was not always easy. I struggled to find cinnamon farmers, since the cinnamon itself grows higher up the hill than where the farmers live. Also, I encountered a language barrier: I did not speak fluent Indonesian, let alone the local language, so I may have missed interesting information. Another difficulty was the fact that I conducted my research in a very religious area during the Ramadan. Although culturally interesting, farmers do not work during this period of fasting, and companies and governmental departments are often closed.

Nevertheless, I enjoyed helping WWF to find out how they can improve reaching their goal towards a green economy. The scenery was stunning: we travelled on motorbikes through beautiful nature to reach the farmers’ houses and I have seen the most amazing places. I also met lovely people who made it possible for me to do my research and made my stay very pleasant. I cannot wait to go back to this wonderful country!