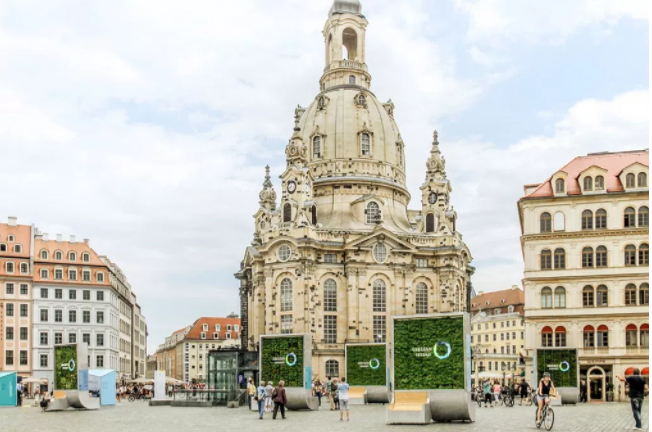 The air we breathe in cities is unhealthy. It is full of pollution, mainly produced by cars. How bad is this problem and what are the solutions? In Berlin I talked to Malgorzata Olesiewicz and Megi Zhamo of the start-up Green City Solutions, who told me everything about their innovative product that offers a solution, the CityTree; making the concrete jungle less concrete and more clean and liveable.

What’s the problem?
Air pollution is a big environmental problem, especially in cities. The website of Green City Solutions gives us some alarming statistics:

– “90% of all city dwellers breathe in polluted air every day.”
– “7 million deaths are caused annually by air pollution.”
– “1.48 trillion Euro is lost annually in Europe due to polluted air.”

Moreover, Malgorzata explained the dangers of a so-called heat island effect: certain spots in the city where the temperature is much higher than in other places. If there is no wind circulation, especially when this spot is surrounded by high buildings, then the temperature rises. When this happens during summer, these spots get even hotter and can become dangerous. According to the Environmental Protection Agency (EPA), the consequences are, amongst others, a combination of environmental, financial and health issues. Think of an increase in air pollution and greenhouse gas emissions, higher energy costs (like air-conditioning costs) and respiratory problems. Especially for older people, the risks are high.

A self generating air-filter
To solve this problem Green City Solutions created an installation that cools down and cleans the city air, especially in these heat islands. This CityTree is a four-meter-high air filter, consisting of moss. The bacteria living on the surface of the moss create an electrostatic effect whenever polluted air flows through the installation. Because of this effect, the polluted air is sucked in, dissolved and converted into bio mass. Hence, the CityTree produces oxygen and the surrounding air is cooled down, lowering the heat island effects in the city. No waste is created, and even better: more moss will grow. In this way, it is a self-regenerating air filter. “Technically it’s not a tree but a vertical plant wall, but it’s offering a solution against air pollution and the increasing heat problems in cities”

The future of clean air
How cool is this! And why are not all cities full of them? I asked Malgorzata and Megi, who explained that they just celebrated their third anniversary and just need some more time to develop and grow. With the CityTree, street furniture as they call it, they are in a stage where people are very curious about it, but need to gain some more trust in the product. This means they need to do a lot of testing, inside and outside of the laboratory, to assure the positive impact of the product. What will the future bring? Currently, the CityTrees are present in fifteen cities; they are shipping to cities like Glasgow, London, Brussels, Skopje; a list that keeps extending. Plans are in the making to bring a CityTree to Amsterdam, so keep your eyes open!

“The CityTree has the same effect as 275 urban trees!”