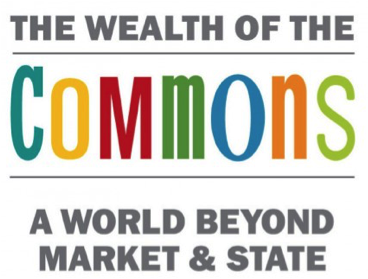 “There Is No Alternative”, Margaret Thatcher famously declared. Global capitalism, neoliberalism – whatever you want to call what we are living by now – trumped communism and marks the end of history. With current events and climate change, I certainly hope that is not the case. Better, I know it is not. Instead, we have delicious TAPAS: There Are Plenty of Alternatives. The Great Transformation (see my previous article) is underway and in this article I would like to highlight some inspiring examples of change.

First of all, one week of my classes was with David Bollier and Pat Connaty about the commons. This is on the one hand quite a straightforward concept, and on the other hand so much more. Put briefly, it is a governance concept describing people self-organising through dynamic sets of social relationships to manage all sorts of resources. At the end of the week learning about it, things suddenly fell into place in my brain and connected to so many initiatives I knew of that could be viewed through the lens of the commons. There is a whole world out there beyond the usual state-versus-market debate, so much TAPAS to be discovered. The commons provide a language, a shared discourse to unite or link various movements. As Bollier puts it: “After all, each of the movements shares a commitment to inclusiveness, participation, social justice, human rights and dignity, and transparent decision-making. The general framing of the commons could help underscore these shared values and forge greater cross-movement collaboration and action.” If we can see that we are all commoning in one way or another, we can feel part of a larger whole moving in the same direction.

Community Land Trusts
One of the most straightforward examples of commoning is a Community Land Trust (CLT). Effectively, a group of people get together to manage a piece of land (remarkably, most projects we visited were given the land). They own the land and decide together what happens. For example, they can have affordable housing built, to either rent or buy. Individuals or organisations can then buy the house from the CLT, but not the land. In other words, the land is not tradeable anymore, it is taken off the market or ‘decommodified’. (And during the crisis, CLTs performed better than private property, with less foreclosures.) Exciting things happen this way, for instance on the Isle of Eigg in Schotland. The islanders bought their land after having struggled for decades with landlords owning the land but being absent from the island, and people and money moving away. In 1997 a CLT was established and community-owned businesses developed, such as a shop, workspace, tourist facilities, hydro power plants and a wind farm. The island’s energy use is now 98% renewable, and schools have opened, because people with children are staying!

Energy co-operations
Perhaps more commonly known are local energy co-operations, fully owned by members. Citizens can become a member by buying (non-tradable) shares in the company and take part in decision-making. In this way they take ownership of renewable energy installations and benefit from them. In the Netherlands there are numerous co-operations (called energiecoöperaties); browse the web and see if you want to become involved! Good starting points could be network organisations ODE decentraal and HIER opgewekt. Democracy and decision-making
Most inspiring for me were the numerous examples of alternatives to, or variations on, our current democratic ways and decision-making processes. For instance, we visited Frome, where the town council is not made up of party politicians anymore, but of a coalition of independents from various backgrounds. Their unique point is that they decided on how they will make decisions rather than having conventional parties agreeing on standpoints. We spoke to one of the counsellors, who found that what the counsellors have in common is that they want to do what is best for Frome. They might have different views on what is good, but they are not in it for personal image or power; not for the glory of being a politician. That sounds quite different from regular politics to me.

There were many more examples of democracy as a verb instead of a noun and I cannot describe them all, but I also couldn’t not mention them. So I will just give some sentences as teaser and you look up more information if you want to 😉

This was not the truth
To end I would like to add one note: commons is not the ‘new truth’ and not the perfect solution in all instances. It is not the case that suddenly commons are good and market and state are bad. And since commons are about human relations, commoning is not easy and no commons are the same. Every now and then we remind each other in class that we should not ‘fetishise’ certain solutions, there is no single answer that should be fought for regardless of the circumstances. Instead, start from where the needs are and how those can be met. Moreover, the state, market, and commons are not separated but interlinked. As with many things, balance is probably the answer. We need an ecosystem of solutions.

To end for real, thank you for your encouraging responses on the previous article! If there is anything from this article you would like to know more of, please get in touch.

Some readings for those who want to know more:

David Bollier on the commons:

Inge graduated from University College Utrecht with a BSc in Earth&Environment and Chemistry and a minor in Economics. She was secretary in the 2015-2016 board of Studenten voor Morgen. Currently, Inge studies the MA Economics for Transition at Schumacher College in England. She publishes articles about her experience and learnings every once in a while.
Twitter @SchrijverEgni